Jason's Shack is a small, crudely constructed house built and used by Jason Voorhees. After his mother was killed, a young Jason began building a place of residence in the deep roots of Camp Crystal Lake's forest. It is where Jason stores the corpses of his victims, sleeps, and prepares for slaughterings. It is also the grounds where he stores his mother's decayed decapitated head as well as a shrine dedicated to it and her iconic pink sweater.

The shack has gone through many changes over the years. At first in the second film, it was a somewhat large house built from leaves, planks of wood, and shutter doors put plainly in site. In Freddy vs. Jason, in Jason's dream, we see it to be much different. It is a cabin like, well constructed shack no bigger than a kitchen and littered with overgrowing vines. The shack is also in the middle of the lake. Finally, in the recent remake, it is seen more as a slaughter house, flooded with corpses, tied up victims, several torture devices, and has an underground basement. In the unofficial sequel to Freddy vs Jason, Freddy vs. Jason vs. Ash, Jason has Freddy's head next to his mother's, keeping as a trophy.

The exterior of the house in Part II 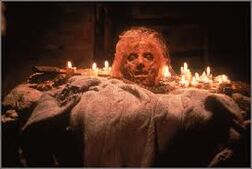 Pamela Voorhees's shrine
Add a photo to this gallery
Retrieved from "https://evil-lair.fandom.com/wiki/Jason%27s_Shack?oldid=4444"
Community content is available under CC-BY-SA unless otherwise noted.