The green Final Offer is a large docking ship owned by the Penguin, stationed at the Amusement Mile. It is wear the greedy criminal and his henchmen resided on a Christmas Eve where Batman was being hunted down by a squad of assassins. 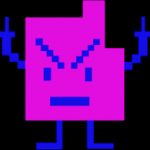