Bowser's Castle (also called Bowser's Keep and Castle Koopa) is the the defensive domicile of Bowser, the main antagonist of the Mario franchise.

Though the tyrannical turtle has had a very large variety of castles over the decades, these lairs have become extremely iconic over the years, as the story of most Mario games end with the titular protagonist saving Princess Peach in these castles and defeating her kingly captor. In later games, the castle has also become the place of residence for Bowser's sons.

They have appeared in almost every Mario game involving Bowser, and is usually used as the final level of the early games. Both the interior and exterior of the fortress are usually painted with a dark, gothic layout highlighted by buckets and rivers of boiling lava. The castle is littered with only Bowser's strongest henchmen and death traps that Mario must traverse to get the final boss room, containing Bowser himself and Princess Peach. 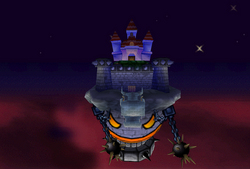 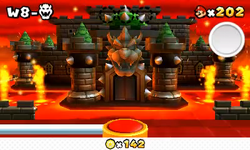 Add a photo to this gallery
Retrieved from "https://evil-lair.fandom.com/wiki/Bowser%27s_Castle?oldid=4422"
Community content is available under CC-BY-SA unless otherwise noted.